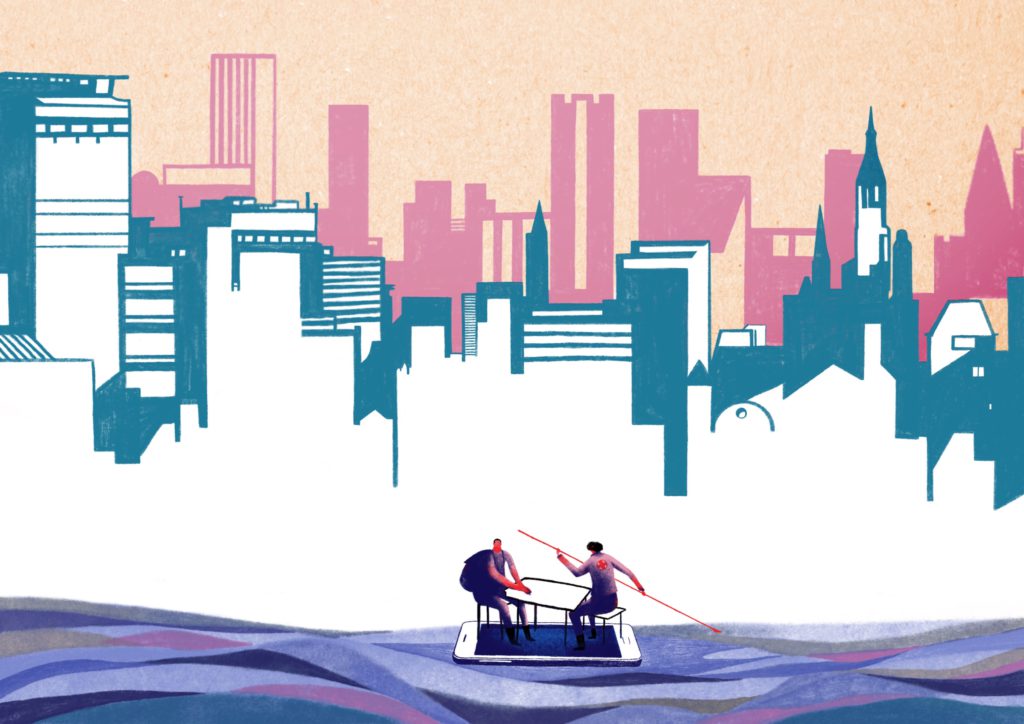 The WhatsApp Helpdesk for undocumented migrants is available 7 days/week to answer all sorts of questions. This initiative is part of Direct Digital Aid, a package of three mutually enforcing digital services supporting undocumented migrants in the Netherlands. The other services are a Helpful Information Web Application and digital voucher aid. Direct Digital Aid has been developed by 510, the data and digital initiative of the Netherlands Red Cross.

It is estimated that there are about 40.000 undocumented migrants (sometimes also called irregular migrants) in The Netherlands. This is a very diverse group, including, amongst others, people whose asylum request has been denied and the so-called unregistered economic migrants. The COVID crisis hit particularly hard on undocumented migrants. They don’t just face increased health risks, but also loss of means for subsistence (as especially the informal sector was impacted by the lockdowns) and lack of access to governmental support programmes. This is why the Netherlands Red Cross included undocumented migrants as a specific target group in their COVID response programme.

Support to undocumented migrants is challenged by the specific conditions of this group. People come from different countries, having diverse cultures and languages. Many of them move from one place to another, depending on where they manage to make a living, find shelter or support. In addition, the fact that they don’t have an official status in the country makes them trying to remain out of sight of the authorities. This however makes undocumented migrants also less visible for aid organizations.

In order to find out the best way to support these people, the Netherlands Red Cross conducted a range of interviews (co-design sessions) with both (formerly) undocumented migrants and aid workers (Red Cross and other aid organisations). From this, we learned that the most pressing issues for undocumented migrants include:

We also observed how vital mobile (smart) phones are for undocumented migrants. They depend on it to stay in touch with the wider community and to access relevant information and services during their journey and at their (temporary) destination. This made us realize that a mobile phone would be a very suitable entry point in connecting with them.

From co-designs with Red Cross staff and volunteers, we concluded that we need products and services that are:

Based on these insights, 510 developed an aid package combining Digital CEA (Community Engagement and Accountability) and Digital CVA (Cash and Voucher Aid), including the WhatsApp helpdesk. The services are partly built around earlier developed and/or existing tools, and have been tailored to the particular context, needs and priorities of undocumented migrants in the Netherlands. Even though the three components can be seen as stand-alone services, we believe the combination of it best supports undocumented migrants towards autonomy and self-reliance.

Any undocumented migrant with a request for support can reach out to the Red Cross WhatsApp helpdesk. This helpdesk is operated 7 days/week by Red Cross volunteers and staff, who can answer questions related to e.g. shelter, medical assistance, or legal advice (information as aid). The helpdesk also functions as the primary feedback mechanism for the digital voucher aid.

The digital helpdesk makes use of WhatsApp for Business, as co-design sessions with the target group indicated that WhatsApp is the application that is used the most amongst undocumented migrants. In addition, OBI4wan is currently used as the helpdesk operating software by staff and volunteers.

Currently, the helpdesk team consists of about 10 volunteers and 8 staff. They answer incoming questions on, for instance, healthcare and shelter. A FAQ document is being used as a reference document for the helpdesk team. In addition, a special Team/channel in MS Teams is created to exchange with other staff and volunteers about any new or unknown issue, and to communicate a hand-over to the helpdesk agent of the succeeding shift.

The main languages used on the helpdesk are English and Dutch. In case of other languages, translation support is requested from any of the volunteers of 510.

Meta-data of helpdesk questions is logged (anonymously), providing valuable insights that can be used for further development of aid products and services as well as for evidence-based advocacy.

The domestic department of the Netherlands Red Cross has been deploying the helpdesk since November 2020, and so far received about 1,500 questions. About half of these are about COVID-vaccination, health and shelter. In a few cases the helpdesk was able to support people in an emergency health situation. About 50% of the incoming questions were about the digital voucher aid.

From surveys and interviews with end-users we know that people appreciate the helpdesk because it is easy. They can access it anytime, any day, and most of times they get a reply the very same day. “It’s easy. It’s like sending a message to a friend. They are very helpful, they help us immediately.”, said one of the undocumented migrants interviewed during the evaluation.

Also, because it is somehow anonymous, people feel comfortable to ask questions and to share specifics relevant to their situation, even if these may be sensitive.

For the Netherlands Red Cross the helpdesk is a great source of information. It helps us to understand better what difficulties people face, and whether our support is effective. We also use the meta-information as a basis for advocacy. For instance, recurrent questions on the helpdesk about the impossibility for undocumented migrants to get a proof of COVID-vaccination, made the Red Cross advocate for this with the Ministry of Health.

Échale is a Mexican social company that provides solutions regarding adequate housing and local infrastructure for communities that lack access to financial opportunities. Its goal is to improve the quality of life for vulnerable communities, by creating local partnerships and  involving them in the process of building sustainable houses tailored to their needs.

The Thai Red CrossWorking together

In 2007, the Burundi Red Cross created decentralized support groups called 'Unités Collinaires'. Each 'Unité Collinaire' is made up of volunteers who have gradually come together to support vulnerable people in their community. Each volunteer gives 2 to 4 hours of their time per week. Today, the Burundi Red Cross has 2920 "Unités Collinaires" in all the hills of the country and a vast network of over 600,000 volunteers.