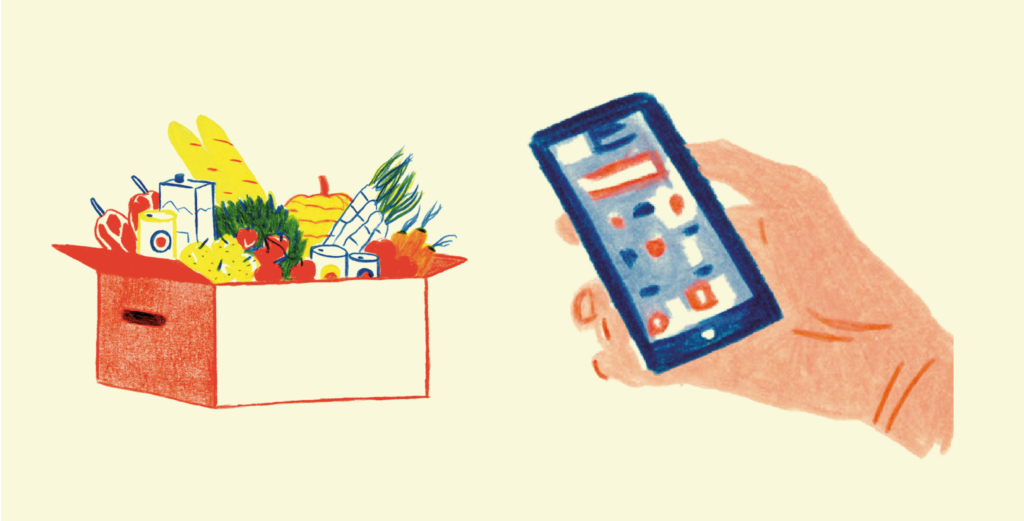 Croix-Rouge chez vous (Red Cross at home) is an operation launched on Friday 20 March 2020 by the French Red Cross to respond to the health crisis and the population’s emerging needs. It has provided home care services, maintained social links and brought psychological support in all the metropolitan territories.

The operation has evolved following the first and subsequent lockdowns, and is now tending to become permanent.

The first general lockdown due to the COVID-19 pandemic resulted in three major events that led to the creation and then the rise of the system:

Subsequently, the end of the lockdown and the second French lockdown highlighted social isolation and loneliness as major social problems. In this context, Croix-Rouge chez vous adapted its services to better support the population.

Requests from isolated people are identified at national level by the call centre (toll-free number: 0800 858 858 – from 9am to 6pm, 5 days a week). Following an initial assessment and if deemed necessary, these requests are transmitted to the French Red Cross field teams who ensure the implementation of actions in the following days.

The answers to calls on the platform address in particular the following issues:

In order to carry out the deliveries in the best possible conditions, various operational partnerships were set up. First of all, from the start of the operations, a partnership was established with the two organisations representing pharmacies in France. Various partnerships with large retailers were also set up at both national and local levels. To meet the challenges of field mobility, partnerships were also concluded with vehicle rental companies.

To adapt the offer of food and hygiene baskets to the demand, from the 10 initial baskets, 6 were changed and 9 others were created, notably baskets adapted to the needs of babies or animals.

In order to provide a complementary response to isolated people, the long-time existing service Croix-Rouge écoute (Red Cross Listening) was integrated to Croix-Rouge chez vous to listen and provide psychological support to people requesting the service. The tools of the platform were reinforced to inform and advise people who need to be accompanied in their specific problems. In addition to the above, self-training modules were set up at the beginning of April to reinforce the recruitment process and face-to-face training in psychological first aid for the responders of Croix-Rouge chez vous to enable them to react to difficult calls in the best conditions.

Whether volunteers are at the call centre to answer calls or in the field throughout France to carry out outreach activities, the association strongly intervened to respond to the crisis, which was welcomed by the supported people.

The launch of the operation

As soon as the operation was launched, all the territories in mainland France joined the scheme, which represents almost the entire country. Reunion Island was quickly integrated into the national system, and New Caledonia immediately replicated the scheme with its own telephone number due to the time difference.

On  April  7, 2020, Croix-Rouge chez vous set up a strategic partnership with the government, and became the reference device in the fight against social isolation. In addition to the financial support to the scheme, this partnership has allowed to promote the scheme to the general public and to make it known to those who need it. At the same time, in addition to press articles, the communication strategy around the scheme was developed through the broadcasting of TV and radio spots. These were broadcast on TV more than 250 times, reaching 37 million people.

If the number of calls per day reduces with the end of lockdown, it is mainly the nature of the calls that evolves. Indeed, although a large part of the French population was able to find alternative solutions to obtain basic necessities and medication, many isolated and more fragile people continued to call. The system is progressively evolving from an emergency system to a support system for people in a situation of isolation. Croix-Rouge chez vous adapts by reinforcing its support activities and by proposing two new services: calls and friendly visits, implemented in more than 50 departments.

These support tools progressively become a detection and support system for people who face social isolation and loneliness.. During the second national lockdown, out of 13635 calls, 9520 concerned Croix-Rouge écoute (Red Cross Listening).

Since the launch of this initiative, Red Cross Chez Vous has provided psychological and social support (340,000 calls) and delivered 17,000 food and medicine baskets throughout the country.

The Croix-Rouge chez vous platform fights against isolation with:

To this end, new tools have been developed:

The deployment of tomorrow

With the aim of making the scheme sustainable, the French Red Cross is setting up an experiment in two pilot areas (South and North regions) of Croix-Rouge chez vous transformation between November 2020 and September 2021.

This experimentation will test a partnership “model” of Croix-Rouge chez vous based on a platform to fight social isolation and local services operated by the French Red Cross and its partners.