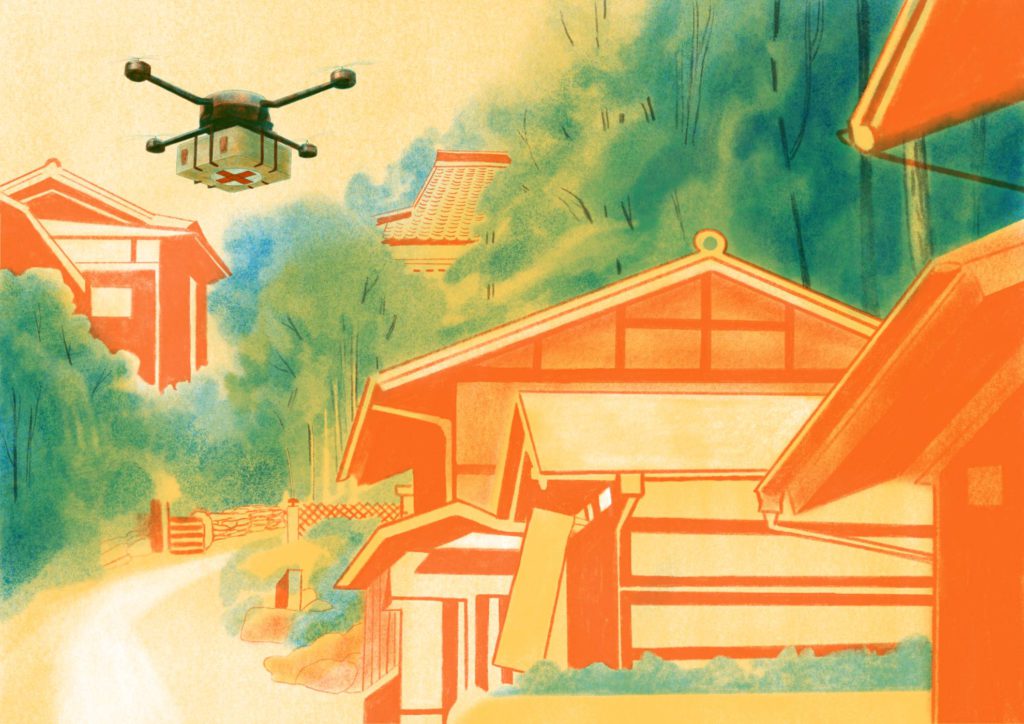 Japanese Red Cross Kumamoto Hospital proposes the “Ambulance Drone Concept” which is the integrated service model of telemedicine and medical cargo drones to improve the access to medical services in rural areas. By operating this service model during peacetime in a sustainable way, drones can be immediately utilized in emergencies. Toward the realization of this service model, the hospital builds up a global network with academia, the private sector, and global humanitarian drone specialists.

In Japan, the super-ageing and the population decrease have been progressing particularly in rural areas such as mountainous and insular regions. The inhabitants in these regions always have challenges in accessing the medical services at a referral hospital that covers a wide geographical area. The challenges in access to medical services are the common social problems both in the rural areas of Japan and other Asian and African countries. In addition, access to medical services becomes more and more difficult if disasters disturb the road networks in rural areas. These problems were seen in the 2005 Kashmir Earthquake, in the 2015 Nepal Earthquake, and in the recent 2020 Kumamoto Floods, Japan.

Toward the realization of this service model, in 2020, the hospital organized two field tests in the mountainous areas and the insular areas of Kumamoto, Japan. The participants from the drone supplier, the health mobile apps company, the technical universities, the medical logistics supplier and the local authorities supported the field tests. In Feb. 2020, the emergency field test which simulated the flood situation was conducted in Oguni town of the Aso mountains region. In this test, an autonomous cargo drone delivered the imitation bloods to the isolated hospital based on the communication by using the medical mobile apps between the Japanese Red Cross Kumamoto Hospital and the isolated hospital. The autonomous cargo drone was remotely operated by the headquarters located 40 kilometres away from the isolated hospital.

In Dec.2020, the Hospital jointly organized Japan’s first field test for the precision-guided medical cargo drone by using the Quasi-Zenith Satellite System “Michibiki” was conducted funded by the Cabinet Office in the government of Japan. The field test was implemented in Amakusa-areas which is the insular region with the geographic challenges in the medical logistics to the remote islands.

In this field test, an autonomous medical cargo drone guided by the satellite dispatched Kami-Aamakusa General Hospital with one imitation blood package and landed Goshoura-Island which is six kilometres away from the hospital. In the return flight, from Goshoura-Island to Kami-Amakusa General Hospital, the autonomous medical cargo drone delivered a sample testing tube of the patient with a fever.

In addition to the successful field test, this test inspired the local authorities and the local health facilities in Amakusa region. After the field test in Kami-Amakusa, the discussion has started to plan the introduction of medical apps as the common communication tool for the local medical stakeholders in Kami-Amakusa region. In addition, the future utilization of medical cargo drones is also being planned to solve the social challenges in these areas. In this way, the integration of telemedicine and the medical cargo drones, what the Japanese Red Cross Kumamoto Hospital names “the Ambulance Drone Concept”, has been processing to improve the medical services in rural areas and in emergencies.

Rigloo Rescuer creates a safe environment for victims requiring pre-hospital emergency care, with the ability to deploy in less

m2m was founded in 2001 in Cape Town, South Africa with a remarkably simple, but equally visionary, idea—that African mothers living with HIV could serve as peer mentors to women facing challenges similar to those they

Spanish Red CrossTech as a tool

“Red Cross listens to you”: the psychosocial support service of the Spanish Red Cross

“Cruz Roja te escucha” (Red Cross listens to you) is a service that offers support and psychosocial accompaniment to the most fragile members of our society, those  especially affected by the COVID-19 sanitary