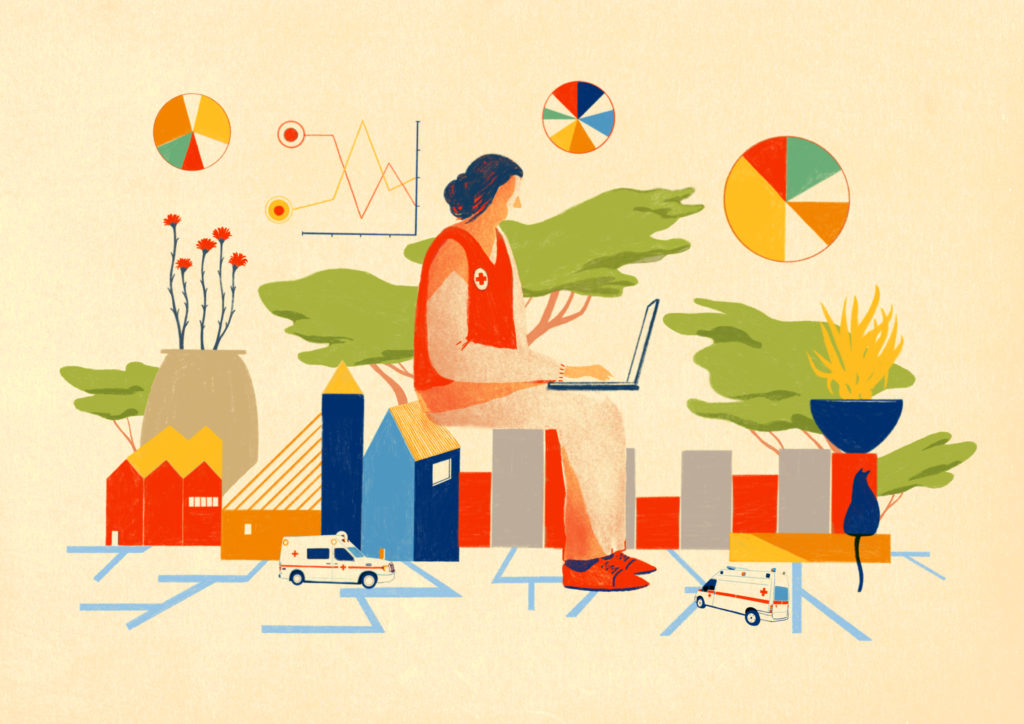 Accountability, continuous improvement and the creation of social value are increasingly important considerations for actors in the public, private and voluntary sectors. In the field of the social and solidarity economy, whose various entities are distinguished by their desire to work for the collective good, these issues are all the more important. Social and Solidarity-based Economy  associations and enterprises seek to produce a positive social impact, and must also meet increasingly complex social and societal objectives. Faced with these expectations and ambitions, they are encouraged to demonstrate that the activities implemented do indeed produce the desired effects on the people they support. It is in this perspective that social impact assessment has become increasingly important in the social economy. In this context, the French Red Cross has chosen to internalize this social impact measurement competence, in order to:

In this perspective, the Social Impact Assessment Unit offers the following services:

Four main phases can be distinguished in the production of impact studies:

The French Red Cross (FRC) has a strong ambition for quality. It has been encouraging and proposing project evaluation approaches for many years and began to look more specifically at measuring its social impact in the early 2010s. A three-year partnership agreement was first signed with ESSEC (a french business school)  in 2012, which provided for the development of a methodological framework and the evaluation of projects of strategic interest and innovative projects. On the strength of this first initiative, it was decided to extend the experience and integrate the competence and expertise of impact measurement within a Social Observatory in 2014, among other tasks. This body is part of the tools developed and studies carried out to meet the occasional needs for impact assessment of the French Red Cross’s voluntary activities. Some ad hoc impact measurement initiatives were also taken by project leaders.

A process of internalising impact measurement was thus developed over three years, with an initial phase of nine months to frame the project: initial diagnosis, definition of the methodological development project, funding applications, setting up teams and identifying the most suitable tools and approaches. The second phase consisted of experimenting with the production of impact studies: 8 studies were launched (1 global (all French Red Cross’s), 1 territorial (on Reunion Island) and 6 for the operational directorates), not all of which were completed, but which made it possible to test the tools and methods identified, to improve them, to identify good practices and points for attention (a feedback workshop was organised, which led to the production of an experimentation report) The final 18-month phase consisted of finalising the impact measurement tools, formalising the service offer, developing the economic model, identifying a digital self-assessment tool and developing all other components of the service offer.

In order to increase its skills on the subject of social impact measurement, the French Red Cross has made the following choices:

Capitalise on what has already been done internally and externally: identify existing resources, whether they be documents, tools, methodologies, resource persons, etc. A capitalisation report was produced at the beginning of the project to identify the most appropriate methodologies according to the impact assessment needs

To be accompanied by experts: support from a university partner (the Social Utility Research Group) in order to design its overall steering tool for the French Red Cross support from an external consultancy firm (Kimso) in the individual training of people

Co-constructing the tools: a cross-functional Project Committee, bringing together representatives of the departments concerned by the MIS (Social Impact Assessment Unit) at headquarters (operational departments, HRD, DFI, private partnerships, etc.) as well as regional referents, meets every six weeks in order to share its needs, feedback, advice and contributions on the tools chosen and developed, so as to ensure that they are truly adapted to the needs and constraints of the actors on the ground

Disseminate skills: it seems essential that this skill of measuring social impact is not the prerogative of just a few people within the French Red Cross, but that several human resources are available at head office, but above all in the regions, to support French Red Cross volunteers. It was therefore decided from the outset to identify regional advisors who could provide support to those involved as closely as possible to their needs and make self-evaluation tools available.

Shared Bike for Sustainable Transportation” project has the goal to create a first of its kind pilot free public transportation system within the city center which emmits no carbon.

The 100 Voices platform is an initiative highlighting and celebrating the efforts and contributions of women to the successes and progress of the Red Cross Red Crescent Movement.